Diet Soda Linked to Increases in Belly Fat in Older Adults – Curb Your Enthusiasm For It! 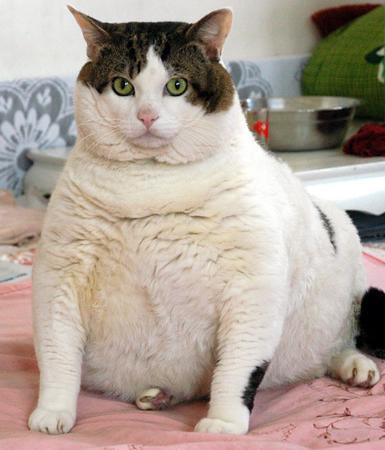 You’ll be a fat cat for sure if you keep drinking that diet soda!

Diet Soda Linked to Increases in Belly Fat in Older Adults A new study published in the Journal of the American Geriatrics Society shows that increasing diet soda intake is directly linked to greater abdominal obesity in adults 65 years of age and older. Thus contributes to a greater risk of metabolic syndrome and cardiovascular diseases. Metabolic syndromeÛÓa combination of risk factors that may lead to high blood pressure, diabetes, heart disease, and strokeÛÓis one of the results of the obesity epidemic. In fact, the World Health Organization (WHO) estimates that 1.9 billion adults were overweight (body mass index [BMI] of 25 or more) in 2014. Of this group, 600 million people fell into the obese range (BMI of 30 or more)ÛÓa figure that has more than doubled since 1980. In an effort to combat obesity, many adults try to reduce sugar intake by turning to artificial sweeteners and in the past 30 years, artificial sweeteners and diet soda intake have increased. Yet the prevalence of obesity has also seen a dramatic increase in the same time period. ÛÏOur study seeks to fill the age gap by exploring the adverse health effects of diet soda intake in individuals 65 years of age and older,Û explains lead author Sharon Fowler, MPH, from the University of Texas Health Science Center at San Antonio. ÛÏThe burden of metabolic syndrome and cardiovascular disease, along with healthcare costs, is great in the ever-increasing senior population.Û The San Antonio Longitudinal Study of Aging (SALSA) enrolled 749 Mexican- and European-Americans who were aged 65 and older at the start of the study (1992-96). Diet soda intake, waist circumference, height, and weight were measured at study onset, and at three follow-ups in 2000-01, 2001-03, and 2003-04, for a total of 9.4 follow-up years. At the first follow-up there were 474 (79.1%) surviving participants; there were 413 (73.4%) at the second follow-up and 375 (71.0%) at the third follow-up. Findings indicate that the increase in waist circumference among diet soda drinkers, per follow-up interval, was almost triple that among non-users: This translates to waist circumference increases of 0.80 inches for non-users, 1.83 inches for occasional users, and 3.16 inches for daily users over the total 9.4-year SALSA follow-up period. ÛÏThe SALSA study shows that increasing diet soda intake was associated with escalating abdominal obesity, which may increase cardiometabolic risk in older adults,Û Fowler concludes. The authors recommend that older individuals who drink diet soda daily, particularly those at high cardiometabolic risk, should try to curb their consumption of artificially sweetened drinks.
Share on Facebook Share
Share on TwitterTweet
Share on Pinterest Share
Share on LinkedIn Share
Share on Digg Share
Send email Mail