Loneliness Can Increase Risk of Premature Death by 14%

Slow Walking Speed Could Be Indicator of Alzheimer’s 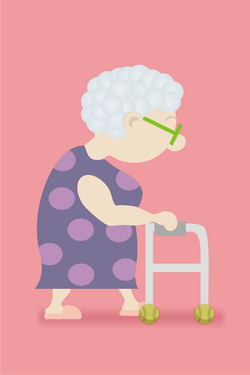 Slow Walking Speed Could Be Indicator of Alzheimer’s How fast elderly people walk may be related to the amount of amyloid plaques they have built up in their brains. These plaques are often associated with Alzheimer’s. So even if someone does not have the disease, their slower walking speed could be a risk indicator according to a study published in Neurologyå¨, the medical journal of the American Academy of Neurology. The study involved 128 people with an average age of 76 who did not have dementia but were considered at high risk for developing it because they had some concerns about their memory. Of the participants, 48 percent had a level of amyloid often associated with dementia. Participants were also tested on thinking and memory skills and how well they could complete everyday activities. A total of 46 percent of the participants had mild cognitive impairment. Walking speed was measured with a standard test that times people on how fast they can walk about 13 feet at their usual pace. The average walking speed was 3.48 feet per second. All but two of the participants tested in the normal range of walking speed. ÛÏItÛªs possible that having subtle walking disturbances in addition to memory concerns may signal AlzheimerÛªs disease, even before people show any clinical symptoms,Û said study author Natalia del Campo, PhD, of the Gerontopole and the Centre of Excellence in Neurodegeneration of Toulouse (University Hospital Toulouse) in France.