Group Recommends Screening For Depression For All Adults 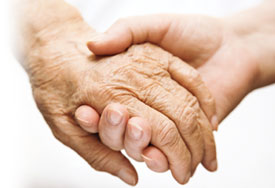 Earlier Hospice Enrollment Would Improve Quality of End-Of-Life Care Among family members of older patients who died of advanced-stage cancer, earlier hospice enrollment, avoidance of intensive care unit (ICU) admissions within 30 days of death, and death occurring outside the hospital were associated with perceptions of better end-of-life care, according to a study in JAMA. Patients with advanced-stage cancer receive aggressive medical care at the end of life. Few studies have examined whether these aggressive end-of-life care measures reflect patients’ preferences or bereaved family members’ perceptions and expectations of the quality of end-of-life care. Alexi A. Wright, M.D., M.P.H., of the Dana-Farber Cancer Institute, Harvard Medical School, Boston, and colleagues assessed the relationship between aggressive end-of-life care and family member-reported quality ratings of end-of-life care. Of 1,146 patients with cancer (median age, 76 years; 56 percent male), bereaved family members reported excellent end-of-life care for 51 percent. Family members reported excellent end-of-life care more often for patients who received hospice care for longer than 3 days than those who did not receive hospice care or received 3 or fewer days. In contrast, family members of patients admitted to an ICU within 30 days of death reported excellent end-of-life care less often as did family members of patients who died in the hospital. The authors suggest that multifaceted approaches might result in more preference-sensitive care for patients and overall improved quality of end-of-life care. In another JAMA study looked at the intensity of end-of-life treatment and the likelihood of dying in a hospital between physicians and the general population. In one study, Joel S. Weissman, Ph.D., of Brigham and Women’s Hospital, Boston, and colleagues examined whether physicians receive higher or lower intensity end-of-life treatments compared with nonphysicians. Physicians were less likely to die in a hospital compared with the general population (28 percent vs 32 percent), less likely to have surgery (25 percent vs 27 percent), and less likely to be admitted to the ICU (26 percent vs 28 percent). ÛÏThe possible reasons physicians received less intense end-of-life care than others could be knowledge of its burdens and futility as well as the benefits and the financial resources to pay for other treatment options, such as palliative care or skilled nursing required for death at home,Û the authors write. Would seem more physicians need to practice what they preach and have patients emulate what their end of life wishes entail.