Posted by  anthony Date May 6, 2011
Advance directives, which allow people to plan ahead for end-of-life care, can be too vague taccording to some experts. That is why a growing number of states are promoting a program to help guide physicians with a patient’s specific instructions. 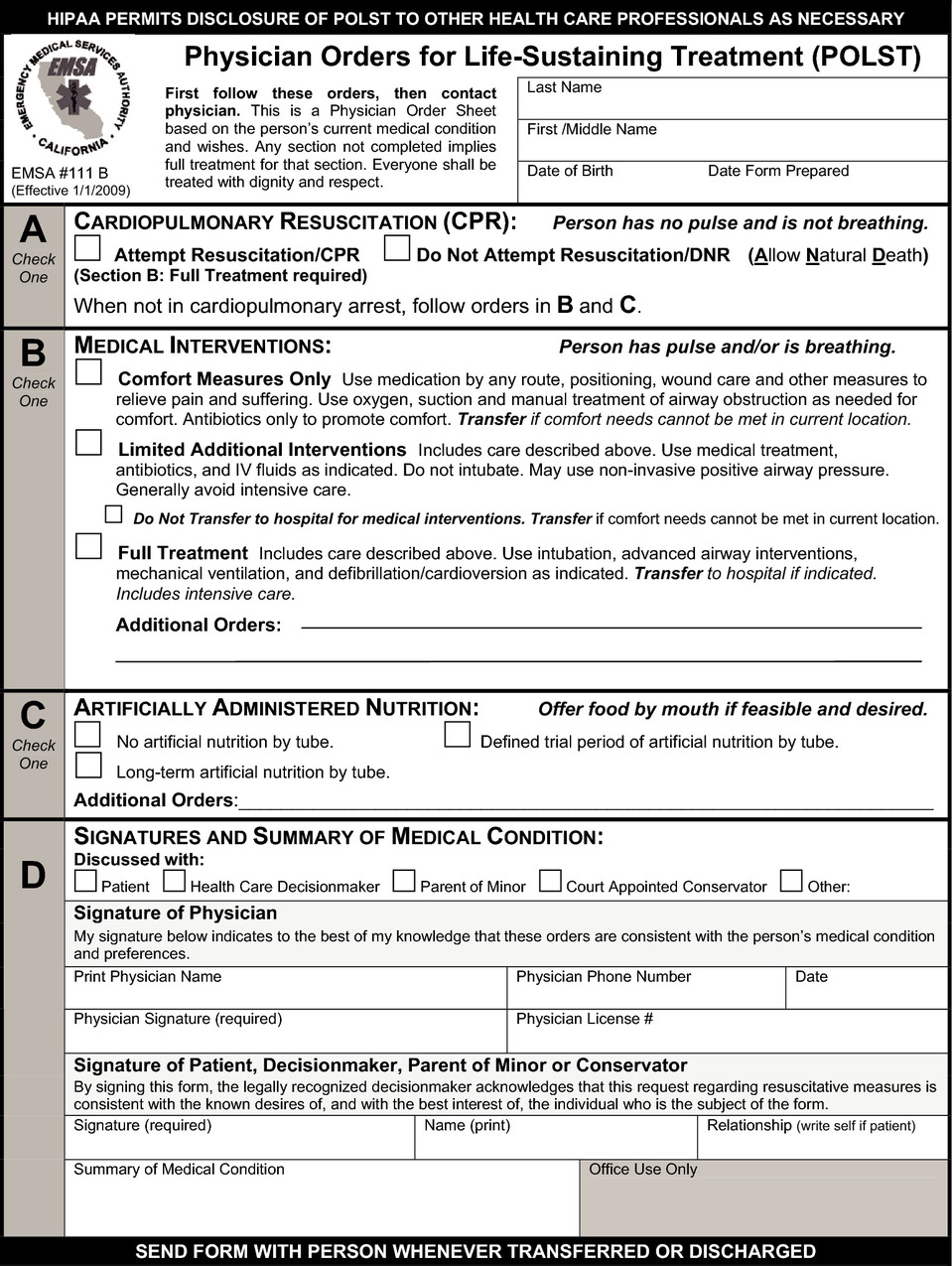 Advance directives allow patients to make their end-of-life wishes known in the event they are unable to communicate. Here are some typical advance directives:
A living will: This instructs family and medical providers on the treatments that a patient wants to receive. The most common decisions involve these life-sustaining treatments:
a) Cardiopulmonary resuscitation (CPR): Used when a patient’s heart or breathing stops.
b) A Do Not Resuscitate (DNR) order: A written physician’s order that prevents the health-care team from initiating CPR.
c) A Do Not Intubate (DNI) order: Intubation is the placement of a tube into the nose or mouth in order to have it enter the windpipe (trachea) to help the patient breathe.
d) Artificial nutrition and hydration: Used when patients are no longer able to take food and fluid by mouth.
Medical power of attorney lets patients select someone else, usually a family member or close friend, to make care decisions when patients are temporarily or permanently unable to communicate or make decisions on their own.
Physician Orders for Life-Sustaining Treatment, or Polst, is a medical order form signed by the patient and the doctor. It becomes part of the patient’s medical record and provides specific instructions to the medical team on such issues as the use of mechanical breathing machines and feeding tubes.
Source: Caring Connections

A Polst form is an official medical order, says Susan Tolle, director of the Center for Ethics in Health Care at Oregon Health & Science University, a developer of the Polst program. Unlike an advance directive, which can be misplaced or vaguely worded, a Polst spells out specific treatment instructions and remains part of a patient’s medical record. In Oregon, for example, the documents also are stored in a state registry so emergency medical technicians as well as hospitals have access to them. States that have adopted the Polst program also have put in place general protections for medical personnel who follow the directives.
Advance directives, which also allow people to designate a surrogate to make decisions about care, vary state by state. While some states’ forms may be highly specific, they may be printed out and stored somewhere where they can’t be found when needed. Many states also accept other documents such as a form called Five Wishes that allows people to spell out what kind of quality of life they want, and make requests such as having their bodies massaged with oils for comfort.
A study supported by the National Institutes of Health last year found that patients with Polst forms were more likely to have treatment preferences documented than patients who used traditional documents such as living wills and do-not-resuscitate orders.
Making end-of-life decisions when a loved one’s wishes are not known can be difficult for families. After years of struggling with Parkinson’s disease and congestive heart failure, Nancy Williamson’s mother became seriously ill last August and slipped into a coma from which doctors said she would never recover. Although Ms. Williamson and her sisters wanted doctors to do more, they learned that their mother had signed a Polst form asking for only limited medical treatment.
Ms. Williamson, a California lawyer, says that after arguing with doctors because she wanted to hold on to her mother, “I realized having the Polst made it easier for us because my mom had made her own health-care decisions.” The experience led her to help clients prepare end-of-life documents, Ms. Williamson says.
End-of-life directives are controversial. Anti-abortion group LifeTree Inc., for example, opposes the signing of living wills and says life sustaining treatment should always be administered. Elizabeth D. Wickham, the group’s executive director, says Polst programs provide legal protection to medical personnel for hastening death, thus encouraging imposed death on patients.
Studies show that many elderly patients prefer to limit medical interventions. In one study of hospice patients, 79% wanted comfort measures only, and 20% wanted only limited additional interventions such as intravenous fluids and antibiotics. In another study only 12% of residents of a long-term skilled nursing facility wanted intensive-care unit treatment that would put them on a breathing machine.
Physicians often don’t have the time or training to coach patients through end-of-life-care conversations, says Bernard Hammes, chairman of a national task force that helps develop Polst programs. In a program he designed at the Gunderson Lutheran Health System in LaCrosse, Wis., nurses, social workers, chaplains and others are trained as advance care planning facilitators to help patients and families discuss and document end of life wishes.
The program, Respecting Choices, has been used as a model by dozens of health systems in the U.S. and overseas. Dr. Hammes says studies at Gunderson Lutheran have shown patients with advanced illness who have documented their wishes are more likely to prefer that their care be focused on comfort and function. They are also less likely to want to have their final medical care in a hospital, or to have interventions like CPR attempted. Those patients also use about $2,000 less in physician and hospital services in the last six months of life, a time when the highest medical expenses often occur, he says.
Insurer Aetna began using nurse-care managers to help manage both Medicare and commercially insured patients with terminal illness in 2004, using telephone consultations with patients, doctors and families to, among other things, ensure advance directives are in place and complied with. As a result of the program, a higher proportion of members elected hospice care compared to prior years, which was associated with a decrease in the use of acute care, intensive care and emergency services, particularly for Medicare Advantage beneficiaries. Precise cost reductions couldn’t be determined for patients in Medicare because it paid the costs directly, Aetna said. But in the commercially insured population, the program led to a net medical cost decrease of 22% compared to a control group not using the care-management services.
Aetna has extended its terminal-illness-care management to all eligible members. “No one is suggesting that anyone be pushed in any specific direction about the choices they make for end-of-life care,” says Randall Krakauer, Aetna’s head of Medicare medical management. But because such choices often aren’t known at a time when patients can no longer express their wishes, “by default we end up using very aggressive curative therapy which in most cases is not only inappropriate, but would not be the patient’s choice.”
Regardless of whether people fill out Polst forms or advance directives, or both, a coalition of health-care groups says it is important for people to make some decisions about end of life wishes and to choose a surrogate who understands their wishes to step in if necessary. The group is promoting April 16 as National HealthCare Decisions Day via its website, NHDD.org. “There is so much fear about having these discussions, when for most people the problems are going to happen when they haven’t had these discussions,” says Amy Berman, a senior program officer for the John A. Hartford Foundation, which focuses on improving health care for older Americans.
Corrections & Amplifications
Nancy Williamson is a California attorney specializing in elder law and estate planning. She was incorrectly identified in an earlier version of this column as Nancy Sebren. Ms. Sebren is a retired Virginia educator.
Write to Laura Landro at laura.landro@wsj.com