Our Friday Song of the Week – Home – Phillip Phillips 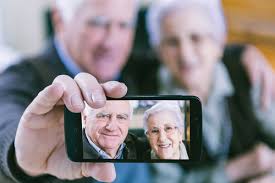 Seniors Have Positive Attitudes Toward Technology Use

Technology has the ability to enhance and enrich the lives of older adults by facilitating better interpersonal relationships. However, few studies have directly examined associations between technology use for social reasons and physical and psychological health among older adults.

Data from nearly 600 participants in the national Health and Retirement Study showed that older adults rated their health better and had fewer depressive symptoms when they used social technology and they reported fewer symptoms of chronic illnesses.

A study examines the benefits of technology use in 591 older adults from the 2012 wave of the Health and Retirement Study.

Older adults had generally positive attitudes toward technology. Higher social technology use was associated with better self-rated health, fewer chronic illnesses, higher subjective well-being, and fewer depressive symptoms. Furthermore, each of the links between social technology use and physical and psychological health was mediated by reduced loneliness. Close relationships are a large determinant of physical health and well-being, and technology has the potential to cultivate successful relationships among older adults.