Many in the aging services professions are aware of the power of music in healing and particularly with dementia patients. Many patients can remember and sing songs even in advanced stages, long after they’ve stopped recognizing names and faces. Dementia care homes often use music as recreation, since it brings patients pleasure. There’s growing evidence that listening to music can also help stimulate seemingly lost memories and even help maintain some cognitive functioning. That is exactly why Glen Campbell came to life when he took the stage during his farewell tour, after being diagnosed with Alzheimer’s!

A new analysis notes a promising link between music and cognitive benefits for older adults with mild cognitive impairment or dementia. The analysis, published in the Journal of the American Geriatrics Society, included nine studies and a total of 495 participants and also suggested that music appeared to improve study participants’ quality of life and mood. Authors concluded that music-based interventions could potentially provide “millions” of older adults with critical support for their cognitive, emotional and social well-being.

In an Alzheimer’s Association newsletter, John Carpenter, founder of the world-renowned Rebecca Center for Music Therapy in New York, shared that music helps stimulate communication and memory skills. Listening to live music and being involved in live music-making experiences empowers people to emerge from the isolation imposed by dementia or simply from loneliness. People who are connected this way are less depressed, more likely to engage in other meaningful activities, and less likely to be given anti-psychotic medications for their symptoms.

Another study has shown that the mental acuity of Alzheimer’s patients who regularly sang over a four month period rose sharply. And still another study revealed that nursing home residents with dementia who often get agitated can benefit from internet video chat that enables residents to both see as well as hear others while reducing agitation.

A study of adults with early memory loss found that practice of meditation or music listening showed significant improvements in memory & cognitive function. And yet another study showed that personalized music therapy may help decrease antipsychotic use and improve dementia symptoms in individuals with dementia. Here’s another study about the benefits of music and the science behind it.

Over two hundred studies, 80 percent published in the last two years, show the incredible impact of music on dementia. Find out more here.

Utilize this pathway created by Music for Dementia UK to see how to incorporate music into all stages of a person’s dementia. 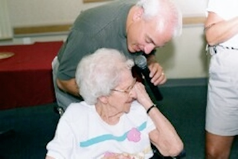 Include in your order some suggested dates and times for the concert, anything you want to tell me about the person and include the types of music and even specific songs that they would enjoy.

Imagine designing a completely customized live music program that is delivered to your residents in a group setting or staged for an individual. Request songs. Add a relaxed conversation where we can call attention to a birthday, a milestone, or anything that would engage your residents.

I fell into a mission for elders when I started performing in nursing homes some 20+ years ago. A professionally-trained singer, I have literally performed thousands of concerts in senior living. I know how to connect with older adults.