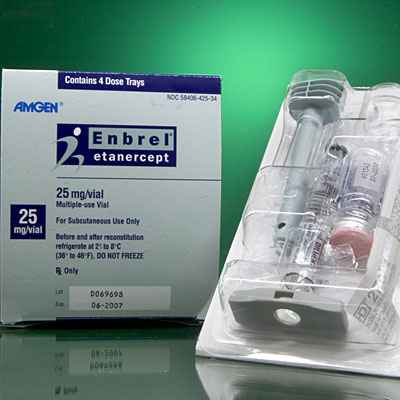 Arthritis Drug May Slow Alzheimer’s A drug that is commonly used for arthritis has been shown to slow the progression of AlzheimerÛªs. A small randomised control study at the University of Southampton tested the drug Etanercept on patients with mild to moderate AlzheimerÛªs. Forty-one participants were either given the drug or a placebo every week for six months. They were then assessed for memory function, efficiency of day-to-day activities and behavior. Results showed that patients who were given Etanercept did not get any worse during the six month follow up compared to those on the placebo, who did decline. Professor Clive Holmes, who led the study, comments: ÛÏOur results are better than we expected. We have shown that using Etanercept in patients who have AlzheimerÛªs disease would be safe and has positive outcomes after six months. However this is a small study and should now be tested in a larger clinical trial.Û Etanercept works by blocking the effects of a protein in the blood called TNFë± which is released by blood cells as part on the bodyÛªs inflammatory response. Etanercept acts to markedly reduce the active levels of TNFë±. Dr Eric Karran, Director of Research at AlzheimerÛªs Research UK, the UKÛªs leading dementia research charity, says: ÛÏAfter many years of research into the role of the immune system in AlzheimerÛªs, led by the team in Southampton, itÛªs promising to see a compound targeting this process showing encouraging early results in people. While we still await the full report of the findings, Etanercept, a drug already recommended for use in arthritis, appeared to be well tolerated by the AlzheimerÛªs patients enrolled into the trial. As always check with your physician. Chances are they will be hearing this first from you!